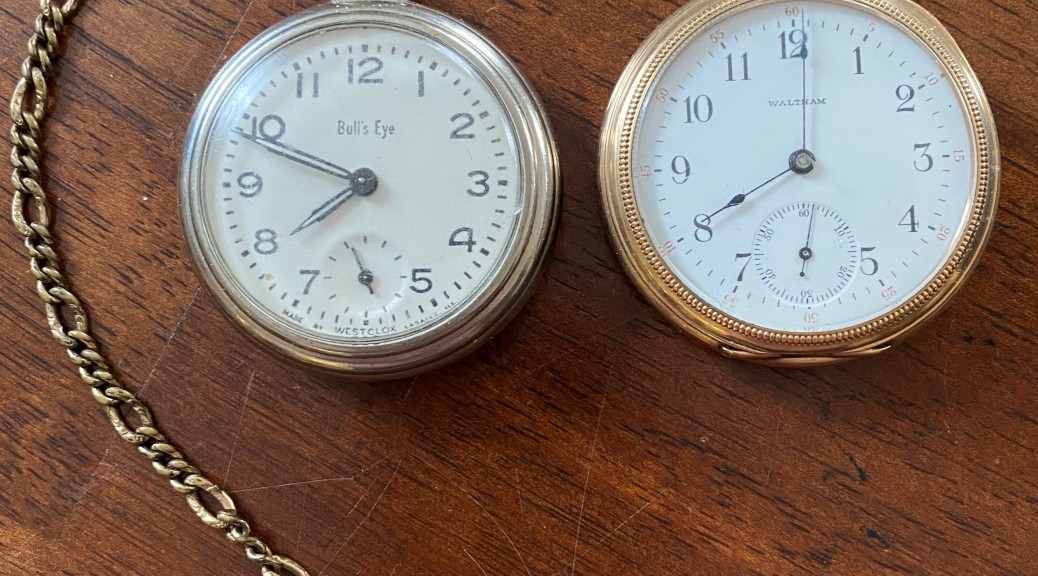 I recently stumbled on a remarkable video:

The TV show was called “I got a Secret” and this episode’s guest from February 8th 1956 was Mr. Samuel J. Seymour, the last living witness to the April 1865 assassination of President Abraham Lincoln.  Born in 1860, Mr. Seymour lived through through 4 depressions, the Spanish flu pandemic,  2 World Wars, witnessed the invention of the light bulb, the automobile, invention of aircraft, and saw President Lincoln alive.  Dying just a few months after this show was aired Mr. Seymour just missed the launching of Sputnik.  It’s a good assumption that in his long life Mr. Seymour met some young children growing up in the 1950s, some of whom would be in their 70s today.  So in the year 2020, there are people alive today who can say they knew someone who actually saw the assassination of President Lincoln, 155 years ago.

My father, who was born in 1939, remembers seeing Civil War veterans marching in parades growing up in Attleboro Massachusetts.  I remember in 1970 seeing Spanish American Veterans from 1898 marching in similar parades.  The oldest person that I ever personally met was born in 1879.  Of course, I never knew anyone born in the 1700’s but is it likely as a small child this man who was born born in 1879 did.  This would make me one degree removed from someone born in the 1700s.

Our deep connections with the past show up in other ways.  My brother Davy was the spitting image of our Great-Uncle George Savoie (Brother Donald).  Even the way my brother smiled was an echo of our uncle who died before we were ever born.  My daughter resembles my mother’s sister.  A cousin of mine resembles our great grandfather.

Each of us have felt the surprising disorientation looking at family and catching a glimpse of long dead relatives .  Other times it could be just a quick look, a habit, a quirk or even they way they walk that connects them to someone long gone.  Even our talents and interests seem to circle back to our grandparents and great grandparents.

Modern technology enables us to reach even father back.  I have had the DNA tested of my mother and five of her siblings.  All of them have a small amount of native American DNA.  Our Native American ancestors all lived back in the 1600s and early 1700s and yet, 300 plus years later, they literally live on in us.  In truth, the past is always present with us.

We can run this thought experiment forward too.  I took my daughter to a Ringo Star concert a couple of years back.  The highlight was singing “We all live in Yellow Submarine” lead by Ringo himself.  I remarked to my daughter that when the 100th anniversary commemorations of the Beatles come around she can tell her grandchildren she saw one of them perform.

There are millions of people alive today that will be alive in the year 2100.  One of those future residents of the 22nd century will be the grandchild of one of those young children who met Mr. Seymour back in 1956.  Amazingly,  there will be a person alive in 2100 who will be able say that they actually met someone who knew a live witness to the assassination of President Lincoln, an event that will have occurred 235 years earlier.

All of this may tempt us to believing that the our connections to the past is durable and always accessible when we need it.  But is that so?  Much of the information about the past is lost forever behind the Event Horizon of Time.  Most historical records from antiquity have been lost with the destruction of the Library of Alexandria.  Advanced civilizations have disappeared under natural disasters, disease and war.  Languages are disappearing across the world.  Recent history is not immune to this either.  Many early films have decayed or have been destroyed by fire.  Books no longer in print fall apart or just discarded.  No medium for storing information lasts forever.  This process has only accelerated in the computer age as we have gone from vinyl records to CDs to cloud based services and data streaming.  Unless that information is continuously transcribed to the latest up and coming new format or media it is inevitable that it will be eventually lost.  Within our families, we have only limited stories of our grandparents and great grandparents.  Whole lives are reduced to just a few anecdotes, if that, especially if generations don’t take the time to talk to each other.

Perhaps the truth is that some connection to our past may be durable but without our intervention and effort those connections may only be trivial and random.

What can do about it?  Value the past and our history.  Record the stories and achievements of our parents and grandparents.  Encourage our children and grandchildren to take an interest family history.  Go to the library and read good books with true stories.

Oral stories are important!  Much of the ancient knowledge we have was past down to us over thousands of years without the benefit of a written language.   Oral communications are just as important today.  My Aunt Phyllis recently passed away and during the Memorial Mass my cousin’s husband Ian gave a wonderful remembrance of his mother-in-law. The presiding priest in his homily captured the wisdom of my aunt.  Both stories illuminated a unique part of my Aunt Phyllis’s life  I am glad I was there to hear them both.

At a family gathering the night before my aunt’s funeral, my Uncle Jack held court with a group of his grand nieces and nephews, all of whom are in their twenties.  As I listened to Uncle Jack,  I took a moment to remind my nephews and nieces how lucky they were to have a Vietnam veteran share his stories.  I asked them to carry it forward forty plus years from now during the centennial of the Vietnam War and share with their grandchildren the stories of Uncle Jack.  Perhaps, in the year 2100, someone will gather around a group of youngsters and say: “My grandfather (or grandmother) knew a man who fought in the Vietnam War and here is his story..”

Make the connections, remember the past, and carry forward.

What is an Event Horizon? It is the one way  boundary around a black hole.  Matter, light and information can cross the boundary from the outside but nothing from within the black whole can cross over the event horizon to the outside.  What ever is within the event horizon is lost forever. But this applies to us too.  Everyday we pass through an Event Horizon since yesterday with all its opportunities are lost to us.

Old age should burn and rave at close of day;
Rage, rage against the dying of the light.

Though wise men at their end know dark is right,
Because their words had forked no lightning they
Do not go gentle into that good night.

Good men, the last wave by, crying how bright
Their frail deeds might have danced in a green bay,
Rage, rage against the dying of the light.

Wild men who caught and sang the sun in flight,
And learn, too late, they grieved it on its way,
Do not go gentle into that good night.

Grave men, near death, who see with blinding sight
Blind eyes could blaze like meteors and be gay,
Rage, rage against the dying of the light.

And you, my father, there on the sad height,
Curse, bless, me now with your fierce tears, I pray.
Do not go gentle into that good night.
Rage, rage against the dying of the light.

Because the unexamined life isn't worth living